Judy and I had booked a trip to Vietnam, but when her health declined, we had to cancel. Now, I am returning to make that exploration, this time of Hanoi and northern Vietnam.

Judy and I both strongly opposed the USA war in Vietnam. In 1970, young Americans were being drafted and forced to serve in Vietnam. A lottery was used to determine who had to go, based on birthdays. Before the drawing, I decided that regardless of the outcome, I would refuse to take part in this ill-conceived, unnecessary, and brutal war. As luck would have it, my birthday got such a low priority that I was not drafted.

On March 1st, I made the short (less than two hour flight) from Bangkok to Hanoi.

This morning I am in Hanoi. So different from Thailand, it’s a bit of a (good) culture shock. Time for me to flex and learn a very different cuisine and new customs. The traffic here is actually crazier than Thailand! Thousands of motor bikes in a no holds barred road rally mixed with cars. My Vietnamese host says there are no rules. Crossing the street, she said you must wade out into the traffic boldly, bluffing with clear signals. That’s the way it is in Italy.

HanoiTraffic from Mel Malinowski on Vimeo.

It is quite a bit cooler up north here than in Bangkok. I left temps in the low 90s, and arrived to temps in the 60s. This week will be highs in the mid-70s, lows in the low to mid 60s. Time to pull out different clothing!

I’ve had a request that I always post pictures of the apartments or rooms that I am staying in, so I will do so in the future.

I’m staying in a lovely apartment, 4th floor walkup, near old town and the “Lake of the Restored Sword”. The building is very old, but the owner has done a marvelous job of creating a warm and comfortable space. Quality dual glazed vinyl window units keep out most of the busy street noise.

Last night, I had a large dish of fried cellophane (rice) noodles, chicken and vegetables for $2USD (50,000 in Vietnamese currency) at a little street cafe. Given how little food costs here, I’ve decided to not cook at all, and thereby eat as much variety of local food as possible in three weeks. Eating street food is the tradition here: a Vietnamese proverb advises that you should “learn to eat before you learn to speak”. I shall try.

I’m not going to try to see everything, as Vietnam is a large country. It is about the area of CaIifornia, but much longer, as if you stretched California to reach all the way from Mexico to Seattle! I regard this as a survey tour, and if I like Vietnam, I will return with more time.

As the days go by, I am coming to like the vibrant day and night scene centered around Hô Hoán Kiêm (Lake of the Restored Sword) more and more. People walking, exercising, musicians playing, and at night, colorful lights everywhere. I’ve rarely seen a common area this alive at all hours.

Today, I went for lunch to Madame Hien, a restaurant specializing in local cuisine. Some of it street food, done very, very well. It was yummy.

You may think the picture below is of a moped dealership. Nope, it’s just a typical street scene in old town Hanoi.

Makes me want to get a moped. And maybe I shall, at my next stop in rural Vietnam. I would not choose to risk my life joining the Hanoi moped derby. I just don’t know the rules well enough to survive. 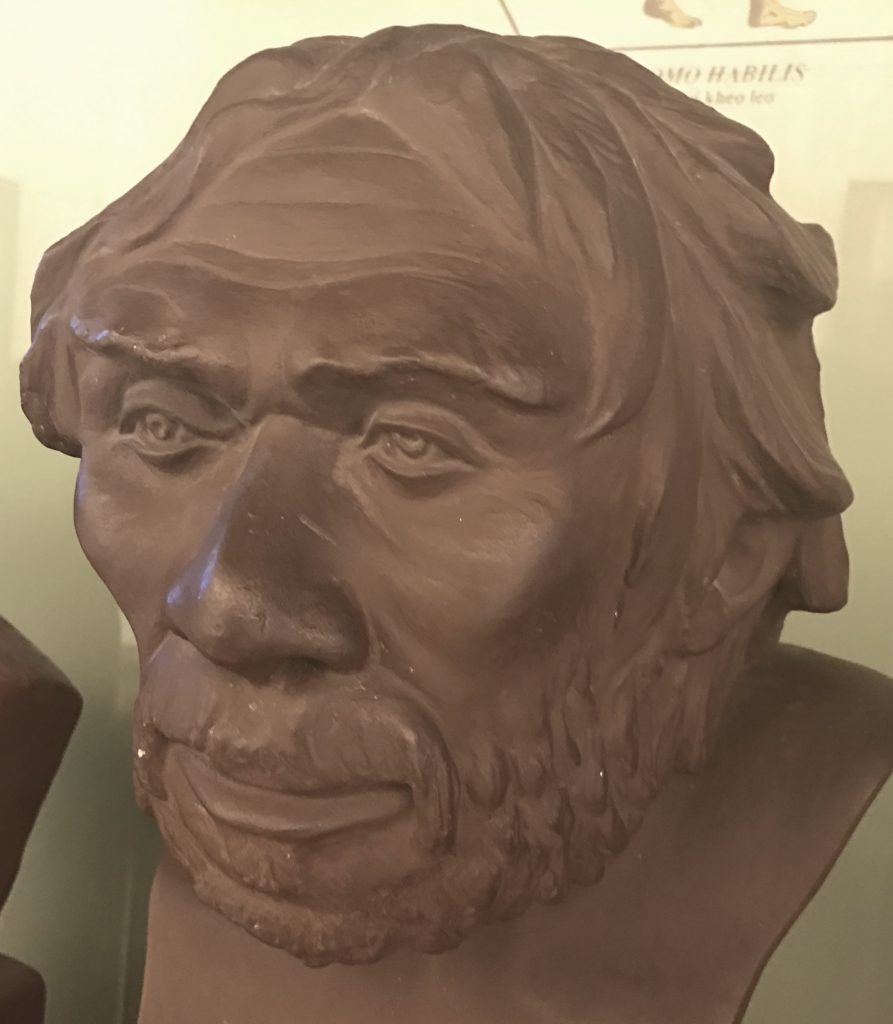 Neanderthal man (in Historical Museum). Europeans have typically 2-5% of their genes from this predecessor to Cro-Magnin man. Look like anyone you know?

I noticed something today: when I took pictures of kids (either with or without asking) everyone was supportive. Why not? The kids are so cute!

It’s not that way in many areas of America today. I have to be careful taking children’s pictures, lest I be suspected of being a pedophile or kidnapper. We have become a very fearful nation. Judy and I grew up as free-range children, and we raised our kids that way.

There are indeed dangers in the world, but there are advantages to being brave and unwilling to live in fear. Most of the bad things we fear never come to pass.

(I went to VietClimb, a small climbing gym in Hanoi, after coming back from Ninh Binh with an Israeli family I met there. Their six year old son Yuval has quite a talent for climbing:)

Yuval at VietClimb from Mel Malinowski on Vimeo.

After a week in Hanoi, it’s time to move on. I’m taking the train about 100 km south of Hanoi, to a karst limestone area called Ninh Binh. I did not get lucky on weather. It was rather grey and overcast the whole week, and it drizzled the last few days. But the temperatures were moderate, neither requiring heating or cooling.

I would not call Hanoi a ‘beautiful’ city, like Singapore or Paris. It is very old, and a lot of it is very crowded, dirty and chaotic. But it also has a lot of character, and numerous very pretty parks and lakes. Good street food is available everywhere, and traditional Vietnamese cuisine is tasty. I enjoyed my week there, and look forward to a few more days to explore later in the trip. Hang out in the right places (like Hô Hoán Kiêm) and Hanoi shows you  its vibrant side.