I came to Chamonix to hike the Walker’s Haute Route, 116 miles from Chamonix, France to Zermatt, Switzerland. (Walker’s is not a name, it means ‘to walk’. There is a winter ski version of the Haute route also)

The Haute route passes by some of the most noteworthy peaks in the European Alps, including Mont Blanc (15,777 feet high) and the Matterhorn, shown above.

The route is steep, involving climbing a total of more than 39,000 feet in total elevation, and descending nearly as much.

On September 5th, I started out in the rain from Chamonix. The first pass you cross is called “Col du Balme”

There is a backpacker’s lodge at the top of Col du Balme. I peeked inside, and the impression I got (with lots of wet hikers around) was a bit steamy.

Serious hikers do not get put off by a little weather. As the Norwegians say, there are no weather problems, only clothing problems!

Wendy and Nancy (above) are two Chinese hikers from New York that I met at Col de la Forclaz. They were near the end of the Tour du Mont Blanc, another classic walk that overlaps slightly with Haute route. It is a bit shorter and easier, and very popular. It starts in Les Houches, down the valley from Chamonix, and goes counter-clockwise around Mont Blanc. The two sections between Chamonix and Col de la Forclaz, and Col de la Forclaz and Champex, are on both the TMB and the Haute Route.

At Col de la Forclaz, I stayed in a backpacker hotel. As all the separate rooms were full, I stayed in the dormitory, which was interesting. Our particular dorm room, one among many, had eleven beds, five upper bunks. I was assigned one of a group of four all together on the floor. A couple from Wisconsin had two of them. I chose the far left to allow one empty space between us. There were eight of us there that night. I must admit it seemed odd, but everyone was quiet and considerate, and it worked out OK. Dinner and breakfast were included, and you could buy a packed lunch for the trail. All in all, I prefer a room to myself if available, as there are fewer distractions.

The rain had gone away overnight, but there was ground fog as I left Col de la Forclaz headed for one of the toughest hikes of the Route. There are two ways to get to Champex, one easy, one hard. I chose the hard, more scenic route, via Fenetre (window) d’Arpette. This requires climbing 3800 feet in elevation on a steep, difficult path up to a pass, and then down a similar trail.

Lots of choices! In my case, it was to go via Chalet du Glacier on up to Fenetre d’Arpette.

There are many water channels along the way, much like the levadas of Madeira Island.

I stopped along the way and collected one liter of this fresh snowmelt water, purified it with my Ultraviolet device, and added it to my trekking pack water pouch. I figured this was going to one long thirsty hike.

Back in the 1800s, when the Glacier du Trient came down into the valley, rail carts such as this one were used to haul glacial ice down the valley for sale.

As I climbed the trail, soon the Glacier du Trient loomed across the valley.

The trail grew very rugged, sometimes involving climbing over boulders, sometimes working your way up steep slippery areas. Hard work. But the beautiful glacier was always in sight across the valley, very dramatic.

At last! The top. Beyond lay another spectacular valley:

There is an ‘Alpine Garden’, a kind of botanical garden, on the hillside in Champex, and I took some extra time to visit it:

Here are some scenes from this lovely collection of more than 4000 mountain flowers and other plants.

This day is not up in the very high mountains, and some walkers choose to take the bus and train to Verbier instead. As I was feeling pretty good, I decided to walk on down from Champex-Lac to Sembrancher.

As I walked along the lake, I saw several people fishing. This local man showed me a nice trout he had just caught.

The walk is along the hillside above the valley, gradually descending to Sembrancher.

After a short train ride from Sembrancher to Le Chable, and then a gondola ride up the hill, I arrived in the ski resort town of Verbier.

From Verbier, you take a gondola up to Les Ruinettes (name of a mountain) not much fun just hiking up the lift path) and start from there.

About an hour up, I passed Cabine Mont Fort, one of the Swiss Alpine Club lodges.

As I walked uphill from Cabine Mont Fort, I met a young couple from Slovakia.

Juray and Alexandra (Sasha). They were carrying camping gear, so their packs were heavier than mine, but they were strong hikers, and we wound up meeting at rest points several times during the long walk to Prafleuri. They have been traveling quite a lot, and have gone to Iceland and Greenland, places I would like to visit, while I have hiked some places they want to go. So we’ve planned to stay in touch online and share notes.

I was the first on the trail, leaving Cabine du  Plafleuri at 7:10am

After crossing the first pass, Col de Roux, I saw a herd of seven Ibex on the hill above me. Sometimes being early has its benefits.

And a marmot, which we saw occasionally along the trail. They are pretty big, about the size of a beaver.

The iron ladders leading to the top of Pass de Chevres scare a lot of people. But to a Stanford Alpine Club Yosemite climber, they were not a bit scary. Exciting and fun, maybe!

The village of La Sage.

This day’s hike surprised me a bit. I started out from La Sage, having taken the excellent Swiss PostBus from my lodging in Les Haudres. Right away, the climb began, on an easy (smooth) but steep trail.

It was pretty along the way.

The only problem was that the trail went up and up, climbing 3800 feet in elevation. I was one tired puppy when I reached the top of Col du Tsate. Then, after a  break for lunch, a very steep descent, which was rewarded with a fabulous apparition: the big Glacier de Moiry.

Walking into the glacier (in a safe way) was exciting. Blue ice! 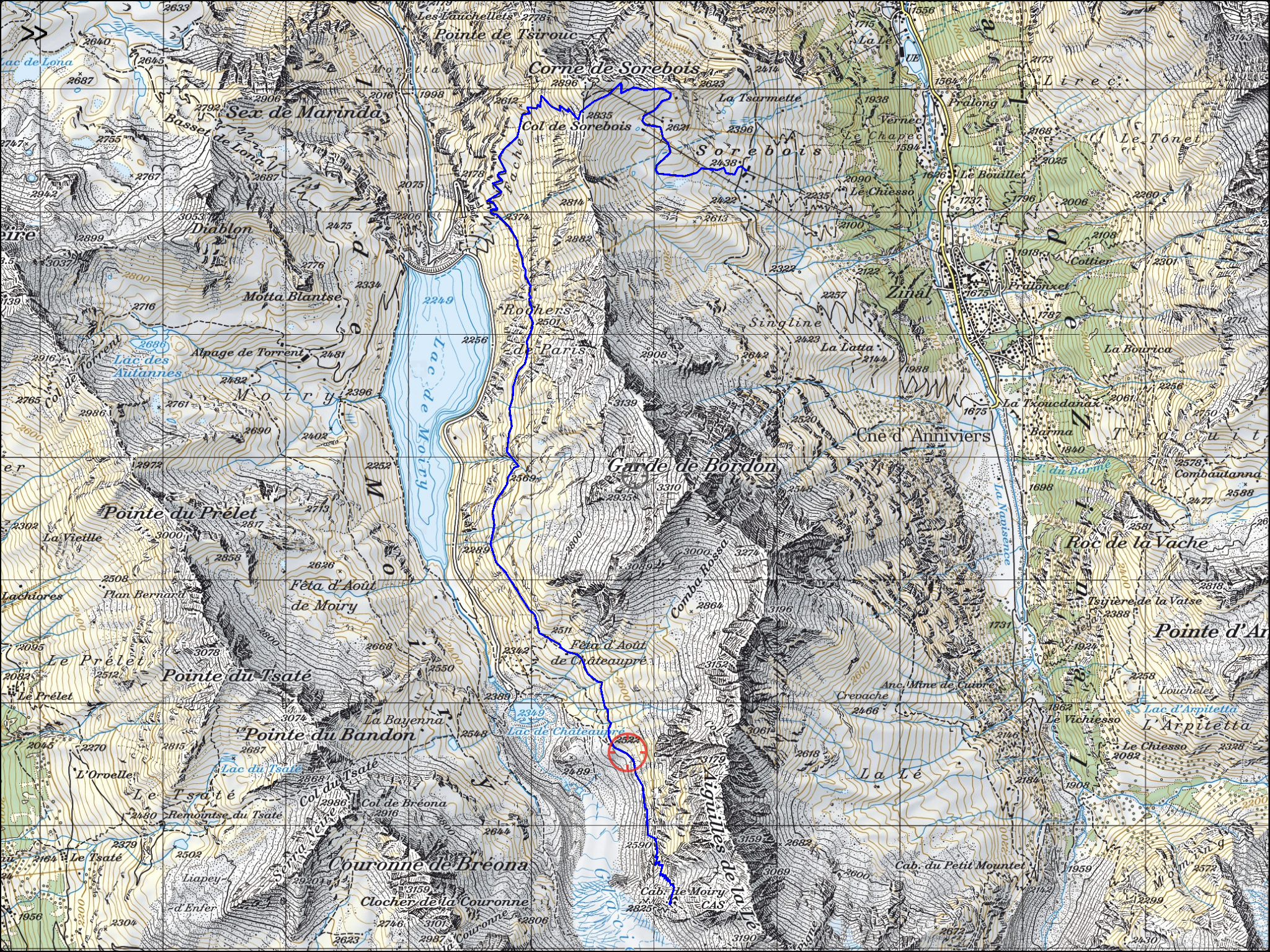 Today’s walk began by a steep descent from Cabine de Moiry, and then a long dramatic hillside traverse above Lac de Moiry. The hillside is very steep, perhaps 45 degrees, and walking along it threading your way above and below cliffs is an experience.

A very simple cattle gate on the hillside.

The blue hue of the lake is really like this.

My intention was to hike to Sorebois, and take the gondola down to Zinal. That last part is a 1 ½ hour very steep trudge down, hard on tired feet and knees. When I got to the gondola, it was closed for the season! This was discouraging. I asked an employee if there was any other way to get down to Zinal. Nope. He said that if I talked to the couple of guys working there, one of them might be going down for lunch and give me a ride. So I asked. Nope. But the guy made a call. I thanked him, and started to hike away. He waved me back, walked me into the mechanic room, and onto a big gondola (these hold maybe 20 or more people), and proceeded to take himself and me down to Zinal! On the way, I asked him (in French) if I could pay something. He said that was not necessary. Sometimes you get lucky, and someone does something very nice for you that they do not need to. I’ll remember and try to do likewise for someone in the future.

Today’s hike is over the Augstbordpass, a climb of 3800 feet in elevation, and then a dramatic view of the Zermatt valley from very high on the mountainside.

You start up through a lovely pine forest. Later, you climb above timberline. Some pictures:

Pictured above are Elin and Rune, a couple from SW Norway that I met on the way to Cabine de Moiry and many times later.

Upon arrival in St. Niklaus, the high country adventure came to an end. Rain was forecast for the next two days, so there was no point in doing a last two optional days along the valley leading up to Zermatt.

This was quite an adventure, the longest trail I have hiked so far. The final step was taking the train up to Zermatt, and seeing as much as could be seen there given the mixed weather.